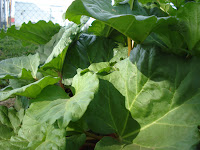 This is a sort of compote, but it's a bit of a cheater, very easy and a great use of rhubarb if you have any in your garden.  It's also a great way to introduce kids to something that they may not otherwise come to love.

We were blessed to have a good sized rhubarb plant in our garden, just about the only thing there, when we moved in.  It's grown over the years and has now split off into two separate plants that provide an over abundance of fruit from late spring all through summer and into fall.  I have made various cobblers and pies with it, but this is so simple, quick and easy that it is one of my favorite things. I've spent the last couple of weeks checking the plant everyday until I knew I had pieces large enough to pull. 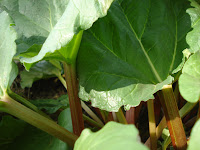 If you don't have a rhubarb plant in your yard, many stores and farmer's markets sell it and it's fairly inexpensive.

You can change the amounts to make as much or as little as you want and this recipe is far from precise, more the way I was taught to cook at my grandmother's side, a pinch of this, a bit of that.

Several stalks of rhubarb ( I used about 20 smallish ones), any size really will do, cleaned and the outer bit just peeled. Trim the leaf and the root end if you pull this from your garden

After you've peeled and cleaned the rhubarb, cut into chunks about 2" long. Toss the damp chunks into a bowl and toss with the flour.  The idea is to coat the rhubarb with flour and that will help thicken the compote as it cooks.

Scoop out the rhubarb, leaving the excess flour behind.  Save the extra flour for now.

Put the dusted rhubarb in a casserole dish and stir in the sugar and vanilla. Cut the butter into chunks and drop over the top.

The extra flour can be dusted over the top of everything.

Cook at 350º for about 30 minutes, stirring occasionally. 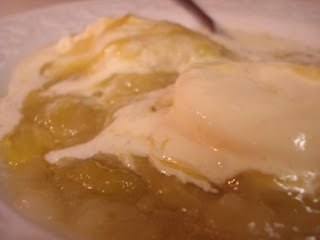 The rhubarb will cook down to almost nothing, though you may end up with some stringy bits that don't cook all the way down.  That's perfectly fine.  Stir occasionally and taste.

If the rhubarb is especially sour, you can add more sugar, stir it in and let it cook a few more minutes.  Be careful in the tasting since the amount of sugar in this will make it absolutely molten hot after it's cooked for a bit.

If it seems to watery, add a bit more flour and bake a bit longer.  This is a recipe that can be scaled down or up very easily and tweaked while you're cooking it.

Just remember, you can't really go wrong with this, you can fiddle with it until you get it tasting just right. Depending on the season, the age of the stalks and the growing conditions will all affect the sweetness of the rhubarb.  I've made this at times with less than a cup of sugar, but it usually requires more. 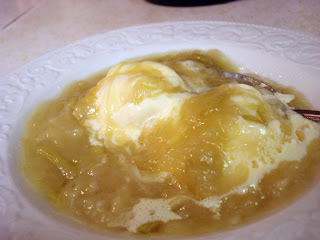 Once you're happy with the taste and the rhubarb has cooked down, you'll be left with a thick, sweet compote that is lovely over vanilla ice cream or pound cake or really anything else that needs a little kick.

I almost always serve this over vanilla ice cream while it's still piping hot.  The combination of the slightly sour rhubarb and the sweet melting ice cream is heaven in a bowl.
Posted by Sandy at 6:32 AM

Nice post, it is useful for me. It is very informative. Thanks for sharing this amazing post.
couponoutlet

Kitchen Gadgets I should own